As of 6:45 am today, our Microryza campaign has reached 100%.  Our study to test anle138b against the genetic prion disease GSS is officially funded! 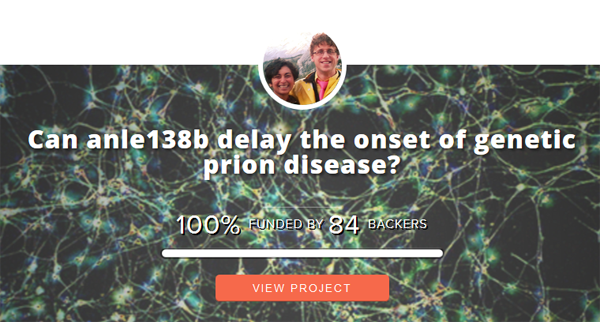 A huge thanks to everyone who made this possible!  The outpouring of support that we’ve seen in the past few weeks has given us renewed optimism and faith in humanity.  Close friends, new friends, friends-of-friends and perfect strangers have come out to support us generously, and we are humbled with gratitude.

We have 9 days left in the campaign, which ends on Friday 9/27.  We’re pleased to announce that additional funds raised beyond the original goal will go towards an additional study of anle138b against two other genetic prion diseases: fatal familial insomnia (FFI) and E200K Creutzfeldt-Jakob disease (CJD).

These new studies will likely start in early 2014.  The mouse models only recently arrived in the U.S., and our collaborator Dr. George Carlson is currently crossing them with another strain of mice that carries a bioluminescent transgene.  This bioluminescent gene will make it possible to monitor disease progression every other week by scanning the mice to see how much they glow.

Recent posts on CureFFI.org provide details of the study design including power calculations, and an itemized budget.  The study will cost $8,800 total: $4,400 for FFI and $4,400 for E200K.  We will initially seek to raise $4,400 through our Microryza campaign, and (optimistically) if we reach that goal as well, we’ll then aim to raise the whole $8,800.

A couple of people have asked us whether the new study will be contingent upon success in the first study – in other words, do we still want to study anle138b in FFI and E200K if we  should find that it’s not effective against A117V GSS?

It’s an excellent question and we think there’s a healthy debate to be had on the merits for and against. Certainly, on one hand, if anle138b doesn’t work against all prion strains, that will make it more difficult to bring to clinical trials and will limit its usefulness.

On the other hand, if it’s effective against FFI and/or E200K CJD that would certainly be useful information to know!  Another important point is that these mouse models differ in more than just which genetic mutation they carry.  For instance, the FFI and E200K mice [Jackson 2009, Jackson 2013] produce only the normal amount of prion protein, while the GSS mice [Yang 2009] are engineered to produce 4-5 times the normal amount.  Testing anti-prion compounds in models of genetic prion disease is relatively new territory, and we don’t yet know what factors may turn out to be important for predicting whether a drug candidate will prove effective in humans.  Having data from a few different models could prove useful.  Finally, these studies will mark the first time that this bioluminescence technology has been used for monitoring the progression of genetic prion disease.  Even if anle138b should prove ineffective, this effort will still be useful as a pilot study to characterize the disease progression in these mice and set the stage for future drug trials.

For these reasons, on the whole we think that it will be valuable to test anle138b’s efficacy against FFI and E200K no matter what the results are from the first study.  As an added plus, this will allow us to get started sooner rather than waiting for results from the GSS study to come in.

If you haven’t yet, please visit our Microryza site and chip in today!