The past month has been a hot time for therapeutic research in prion disease.  Two new studies have announced positive results in animal models and have proposed that these treatments may eventually be evaluated for possible use in humans.  The media coverage hasn’t always been as good as the science, so here’s the lowdown. 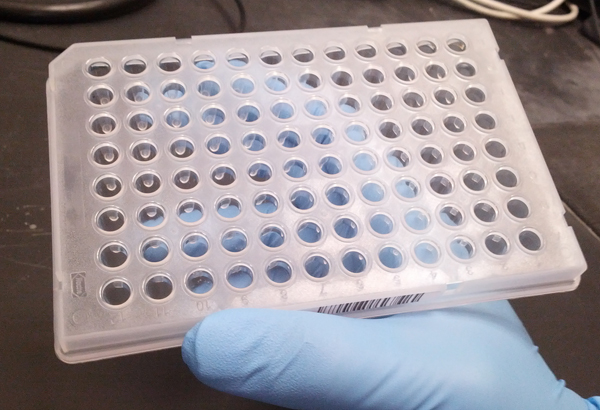 Above: The new studies on astemizole and anle138b both relied on high-throughput screening using tools like these 96-well plates to test thousands of compounds.  High-throughput screening used to be exclusive to pharmaceutical companies, but today more and more academic research institutions are using it too, helping to discover potential ways to treat rare diseases like CJD, FFI and GSS.

The first announcement concerned a drug called astemizole.  Scientists at Scripps Florida discovered that this drug can increase reduce the amount of prion protein produced by cells, potentially delaying disease [Karapetyan & Sferrazza 2013].  Astemizole used to be an FDA-approved antihistamine.  It was later pulled from the market due to very rare cardiac complications.  On balance, though, it’s actually got a good safety record – the adverse effects were deemed enough to make the drug obsolete in the face of newer and better antihistamines developed in the 1990s, but are not common enough to preclude its use in this case.  After all, prion disease is a lot more serious than seasonal allergies.

So the astemizole finding could turn out to be promising.  But Scripps’ own press release described the finding as the “first potentially effective therapy for human prion disease.”   Whoa!  Let’s back up a minute here.  In the mouse model used in this study, astemizole only delayed onset of disease by 4%, and the effect was of borderline statistical significance (p = .06).  Further work will be needed to even know for sure that the effect is real.  Moreover, several other drugs and supplements have delayed disease by more than 4% in animal models – statins, curcumin, memantine, rapamycin and Scutellaria lateriflora to name a few.  Measurable effects in an animal model don’t necessarily imply an “effective therapy” for humans.  Moreover, both astemizole and tacrolimus (a second candidate drug identified in the Scripps study), had already been investigated as potential treatments for prion disease years ago [Kocisko 2003, Bertsch 2005, Mukherjee 2010].

Future work may yet show that astemizole is indeed effective and could be brought back onto the U.S. market.  For now it’s too early to say.  But actually, what’s most exciting about the Scripps study is not astemizole in particular, but the new assay that the scientists used to discover astemizole’s effects.

Most past efforts at discovering drugs for prion disease have focused on trying to prevent the conversion of healthy prion protein to diseased prion protein.  That’s a dodgy business because prion diseases come in several different strains – fatal familial insomnia, Gerstmann-Straussler-Scheinker syndrome, and multiple subtypes of Creutzfeldt-Jakob Disease – and so far all of the treatments that target prion conversion have found effects to be strain-specific even among mouse prion strains, making it a longshot that they’ll work in human prion strains.  In contrast, the Scripps researchers focused on reducing the amount of healthy prion protein produced by cells to begin with.  That’s a more universal approach, because all prion strains rely on having healthy prion protein available in order to convert it and spread throughout the brain.  We’ve argued that reducing prion protein levels is the best therapeutic strategy, and the Scripps study is evidence that other scientists are starting to think this way as well.  Hopefully this will lead to more exciting therapeutic leads in the future.  To learn more about the Scripps study and why we think it’s good news – but definitely not a “first potentially effective therapy” – read our review of the study on CureFFI.org.

The second piece of news is the discovery of a completely new molecule dubbed anle138b [Wagner 2013 (full text here)].  A group of scientists in Germany had been working on this and related compounds for several years.  They patented anle138b back in 2009 and published some related results in 2011 [Geissen 2011, Leidel 2011] but were apparently waiting to finish more experiments before publishing their results on anle138b last month.

The researchers provided a variety of biochemical evidence to argue that anle138b inhibits the formation of infectious particles composed of multiple prion protein molecules, and that its effects appear to be equal across multiple strains of prions.  They also tested it in a Parkinson’s disease mouse model and found evidence of therapeutic effects, suggesting the effects might be applicable to more than one protein-folding neurodegenerative disease.  But the most impressive part of the study is the survival evidence from prion-infected mice.  When mice were treated with a large dose of this compound starting right at the beginning of prion infection, it nearly doubled their survival time.  Even more impressively, it extended survival by about 30% even when it was administered pretty late in prion infection.

That sort of effect is almost unprecedented.  As we’ve pointed out, similarly large effects late in disease were seen years ago for pentosan polysulfate, which nevertheless turned out not to work in humans [Bone 2008, Tsuboi 2009].  For that reason, it’s too early to get excited that anle138b will necessarily prove effective.  Still, it has a lot going for it: anle138b can be taken orally and find its way into the brain, whereas pentosan polysulfate had to be infused directly into the brain, which led to some nasty complications.  And though it’s too early to say, the evidence so far suggests anle138b’s effects might be fairly consistent across different prion strains.

As a novel molecule, anle138b is still a long ways from becoming a drug – more work will be needed to demonstrate its safety and efficacy before it can advance to a clinical trial in humans.  And it didn’t prevent or reverse disease, only delay it, so even at best it won’t be a cure.  Still, it is the most promising candidate developed so far.  Therefore it’s been slightly surprising that it has received almost no media coverage, especially when compared to astemizole.  On the other hand, the little coverage we have seen has been pretty inflated.  SciTechDaily reported that anle138b “Slows Down the Onset and Progression of Parkinson’s Disease”.  That statement needs two additional very important words: “in mice.”

To learn more about the details of anle138b, check out our review on CureFFI.org.  It’s too early to know if it will prove effective, but this compound is nevertheless exciting news, and another sign that progress is being made.