After the incredible generosity you all showed during our ambitious (and successful!) mid-year fundraiser, we’re blessed to yet again have a donor stepping forward to sponsor a match. Donations to Prion Alliance will be matched 1:1 up to $10,000 through the end of December. Donations can be made through Paypal or via check mailed to Prion Alliance, PO Box 391953, Cambridge, MA 02139. Thank you for your continuing support!

Our goal this year was to grow, and grow we did! In total the Vallabh/Minikel lab is now up to a headcount of eight, and the corresponding leap in our lab’s productivity has been breathtaking. Alongside Eric and I the team now includes Meredith, Juliana, Taylor, Vanessa, Ethan, and Raja; more on everyone here. We are privileged to lead a team of such thoughtful and committed scientists. Meanwhile the Broad Institute, and larger Boston/Cambridge scientific community, continue to be a scientific dream home for our mission.

At the same time, the broader world of drug development continues to reveal new complexities. After Ionis previously projected first-in-human dosing of a PrP-lowering ASO in 2022, we are closing out the year without this milestone having occurred. To the best of our knowledge the program continues to progress, but behind schedule. Like everyone else, Eric and I are awaiting updates. We have championed this program long and hard, and it’s disappointing to watch its timeline serially recede into the future. Personally, this year I have come to understand in a deeper way that after years of questing at the level of molecules, now we are questing at the level of human systems.

When we launched this quest more than a decade ago, we knew that biology was complex. We knew that in the man vs. nature matchup that our quest would entail, the complexity of the disease might foil us. I won’t go so far as to say that we’ve put that concern to rest — the biology can always still surprise and confound us. But in PrP lowering we now have in hand a therapeutic hypothesis stronger and better-supported than we could have possibly hoped at the outset. And yet: the road to test this hard-won therapeutic hypothesis in humans is still incredibly long. The onerous finalization of clinical protocols, the administrative onboarding of clinical trial sites, the initiation of the first experiment, the enrollment of sites and of patients, the locking up of data from the first experiment until pre-specified analysis points, samples sitting in queues waiting for analysis… all this just to glimpse the very first data, of much, from the very first study, potentially of many, before a drug might someday officially be deemed effective. Before it might be approved and made broadly available to patients. And that’s only if everything goes right.

If this system feels at times like a maze, it is ironically a maze that shares our goal. A maze built with the noble goal of promoting human health, developing drugs and saving lives. Yet the maze presents us with a new failure mode we must guard against: winning on the playing field of molecules, only to run out of time on the playing field of human systems.

This call to action for ourselves is not to fault any individual or role. In fact, it has been a unique privilege of our quest to interact with such thoughtful and passionate people in all sectors: academic, industry, regulatory. As individuals, they feel our urgency. But as in any complex human undertaking, sometimes institutions struggle to be the sum of their individuals. The intent of the thing, the initial spark, becomes harder and harder to detect among the scripted patterns of behavior and communication, the deference to habit and form. That lives are involved can make us perversely more conservative, more likely to ward against missteps by looking to the past, even if its precedents are unworthy of our vision.

In September, I had the tremendous honor of interviewing former President Obama onstage at the Illumina Genomics Forum in San Diego. I got to ask him about some of these very issues. About creaky systems. About hope. Above all, for me it was a much-needed reminder that patience is a practice, not a trait. That change is incremental and that if we wish for the honor of serving as its chaperones, we must make ourselves ever more efficient engines for the conversion of frustration into forward momentum. That the work to solve one meaningful problem, if you care enough, will always unpack itself to reveal messy context and system-wide failures of imagination, all of which are now also your problem. That we must be constantly vigilant, vocal, and feisty; we must be, to a judicious degree and at the right moments, trouble.

While San Diego certainly stands out in the lineup, this year has been rich in opportunities to voice our twin messages of hard-earned hope and painful urgency. Eric and I spoke at academic conferences and seminars, at clinical Grand Rounds and in a number of local fora. We had a chance to participate in Broad’s “Science for All Seasons” talk series, which is geared towards the science-inclined public; you can see our recorded talk here. We circled back on our first ever prion research project (!), writing up the outcome of our 2013 crowdfunded campaign to test the small molecule anle138b in mouse models of genetic prion disease; you can read Eric’s reflections on what this work taught us, how it kickstarted us forward, and what we’ve learned in the intervening years. (A big shout out to all of you who remember the grassroots hustle of those early days, and have been with us ever since!) We published a hard look at preventive clinical trials in neurodegenerative disease, finding evidence of missed opportunities: overwhelmingly, to this day, trials focus only on already-sick patients, and a surprising number are simply retesting existing drugs in very slightly different ways, rather than testing new drugs with the hope of radical impact. I had the opportunity to work closely with acclaimed genetic counselor Jill Goldman to update the genetic counseling guidelines for prion disease, a project about which I spoke at the National Society of Genetic Counselors’ annual conference in November. This was a personally powerful undertaking for me — a chance to revisit my own counseling and testing experience, touch in with the residual disappointment I was carrying, and find that I was ready to set it down. My cousin Usha recently shared a beautiful quote with me: “Forgiveness is giving up hope for a better past.” In parting with this hope I found myself ready to focus instead on helping to pave a better road for those who follow. You can read more about this experience here.

On a lighter note, recently Eric and I were recently interviewed by NPR’s Short Wave podcast and were featured in episodes 2 & 3 of their series on prions (also available on Spotify and Apple Podcasts). It was a wide-ranging chance to talk science and mission but also personal journey and family life, right down to our breakfast routine.

Well-powered by beautiful breakfasts, at home the kids continue to thrive. Daruka, now five, has dived headlong into kindergarten without a backward glance, and has fast earned herself a reputation as that kid whose hand is always in the air. A new maternal undertow tugs as she inherits my ancient crowns: nature nerd, bookworm, wannabe Mario Kart addict reigned in only by her parents’ elaborate rationing, kindergartener who wields big words out of context then watches slyly to see if she’s passing. Kavari, heartbroken to be left behind in toddler-land, is hellbent on finding a warp that will speed him across their 2.5 year age gap and into the realm of the big kids. But he still hasn’t mastered his tiny-man temper, which sometimes sends him spinning in circles, small fists akimbo, in teary, desperate search of something to pummel to make it all right. In this state he is apt to inform Eric and I, with great severity, that we are “bad guys.”

Over time, we’ll paint a picture for the kids of the complexity that all of us are up against: a world where everything isn’t all right, but where there are no bad guys, not really. Think of a Mario Kart grand prix, we’ll tell them. Every driver sees the same track, just a little differently. In our little view box, each of us is protagonist — even Waluigi and Dry Bones Bowser. Sure, taken as whole we’re a bit of a ragtag crew, but we’re not so unalike, all just fumbling to make the most out of our parameters and constraints as we charge, mostly together, down the track.

Thank you for being with us in this race. 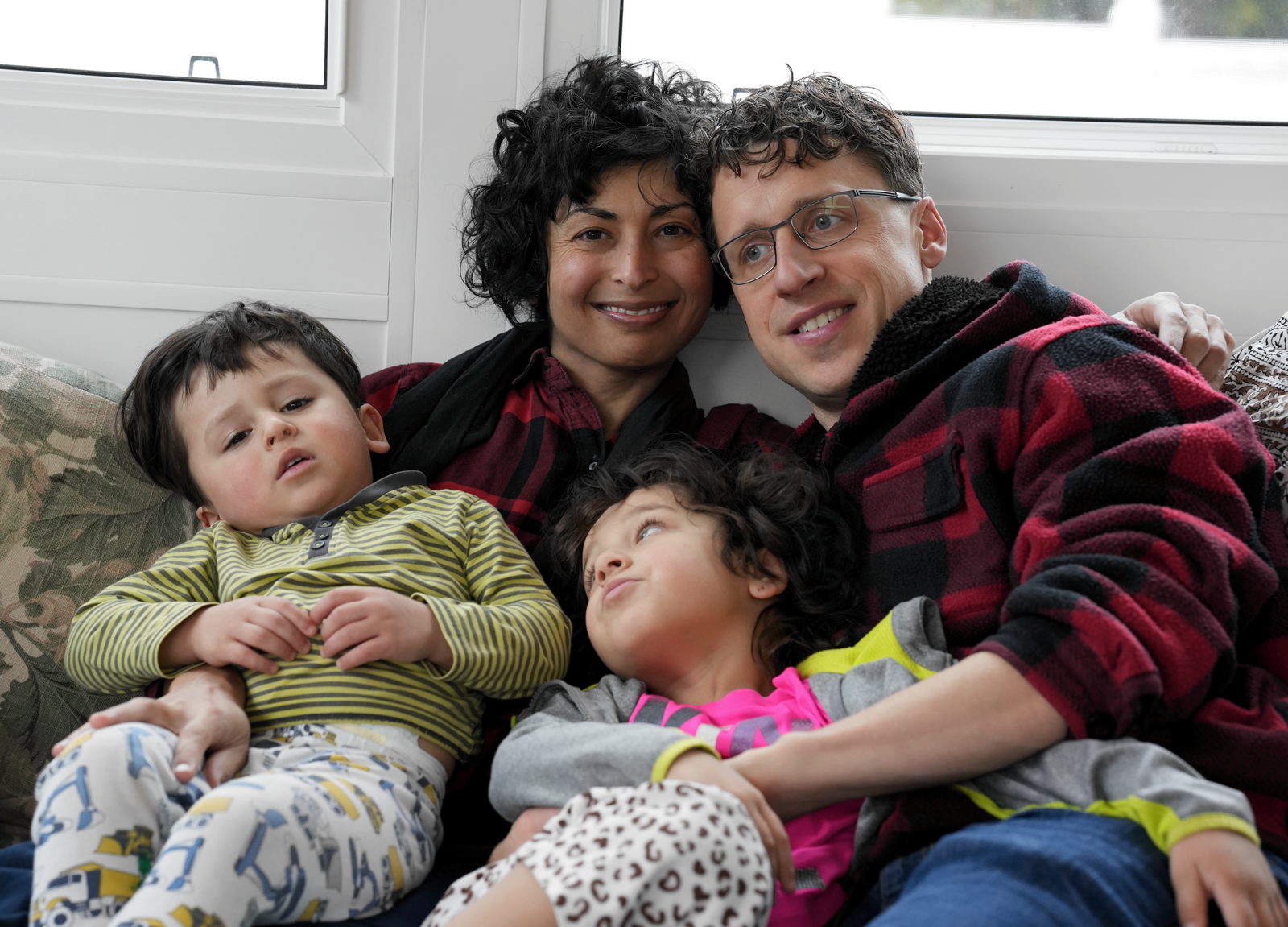 Sonia Vallabh is co-founder of Prion Alliance and a scientist at the Broad Institute of MIT and Harvard, where her work is focused on therapeutic and biomarker development for prion disease.