In the past few weeks we’ve seen user comments on CureFFI.org and posts on Facebook by people wondering whether cannabidiol might be a promising treatment for prion disease. 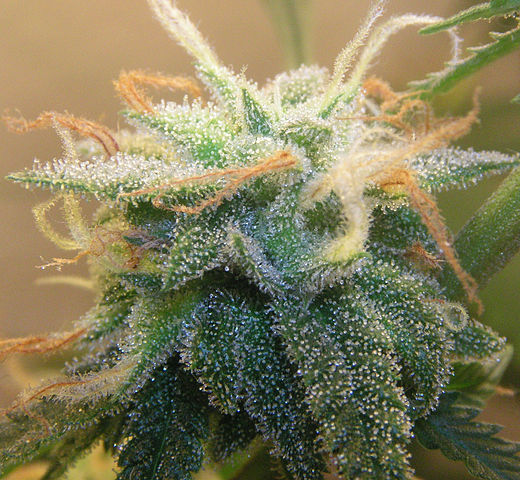 Above: cannabis, from which cannabidiol is derived.  Source: Wikimedia Commons.

Cannabidiol is a non-psychoactive derivative of cannabis.  Unlike THC, the foremost “active ingredient” in marijuana, cannabidiol doesn’t make you high.  But it can cross the blood-brain barrier to get into the brain [Deiana 2012] and it appears to have some other, non-intoxicating effects on the nervous system.  A pharmacological preparation of cannabidiol marketed as Sativex® is approved for sale in Canada as a treatment of certain symptoms of multiple sclerosis.  Researchers have also tested cannabidiol in animal and cell culture models of several neurodegenerative diseases, including Parkinson’s [Garcia-Arencibia 2007] and Alzheimer’s [Martin-Moreno 2011].

There has been exactly one published study examining the effect of cannabidiol on prion disease [Dirikoc 2007 (ft)]  In the group of mice receiving a high dose immediately upon prion infection, symptoms and death were each delayed by about 6%.  The effect was not seen when the drug was administered later or in a lower dose.

The study was criticized in a subsequent letter [Dicou 2008] for failing to clarify the mechanism of action of the drug, in particular, whether cannabinoid receptors were involved.  Dicou also noted that the drug was only shown effective in a high dose immediately after infection, whereas prion diseases in humans are not diagnosed until late stages of disease when symptoms appear.  These points were also mentioned in a subsequent review article [Iuvone 2009].

But that’s not all that’s wrong with Dirikoc’s study.  The most important point is that the mice were infected “intraperitoneally”, meaning by injection into the body cavity.  This is often abbreviated “i.p.” and, along with oral and subcutaneous infections, might be called a peripheral infection, meaning the prions are in the body but not yet in the brain.

In the sporadic and genetic forms of Creutzfeldt-Jakob Disease, fatal familial insomnia and Gerstmann-Straussler-Scheinker syndrome, the disease starts in the brain, not in the body cavity.  Even in variant or iatrogenic Creutzfeldt-Jakob Disease, acquired by food or surgery, patients don’t know they’re infected until they start to have neurological symptoms, meaning that prions have long since entered the brain.

So there’s really no human equivalent to the notion of treating mice from the very instant they’re infected with prions in the gut.  One could imagine a scenario where a researcher accidentally sticks themselves with a contaminated needle, but no case of prion disease from this sort of accident on the job has ever been reported.  If there were such cases, odds are we already have the tools to treat them.  A decade ago, researchers at the MRC Prion Unit in London showed that, in mice with peripheral prion infections, injections of antibodies against prion protein can delay disease a very long time, probably indefinitely [White 2003].  If prion diseases all started in the body and gave us plenty of advance warning, they’d already be cured.  The trouble is that the antibody treatment didn’t work in mice that were already sick or that had infections in the brain.

Cannabidiol has never been shown effective – indeed never even been tested – in a scenario that realistically reflects the treatment opportunities available for prion diseases in humans – namely, treatment late in the disease course when prions are already in the brain.

Could cannabidiol still have some effect against prion disease anyway?  We have no evidence to say it couldn’t, but in science, the answer to every question is “no” until someone proves “yes”.  Dozens of drugs have shown some effect in some model of prion disease at some point in time [reviewed in Trevitt & Collinge 2006 (full text here)], but even the one that was most effective of all in treating mice, pentosan polysulfate, ultimately proved to have no effect at all in humans [Bone 2008, Tsuboi 2009].  So it’s worth taking all studies of anti-prion drugs with a good dose of skepticism.  When we prioritize drugs for further research, we need to consider how rigorous were the studies that showed therapeutic effects.  The strongest bets are drugs that have been shown effective even late in the disease course, in animals with prion infections of the brain, and across multiple prion strains – ideally including human prion strains.  Cannabidiol meets none of these criteria.

But luckily, several groups around the world have undertaken large-scale drug discovery efforts to find anti-prion treatments and are testing their drugs in animal models that much more realistically reflect what treatment in human disease will look like.  The recently-announced new compound anle138b extends life in mice even late in disease course.  Even if it’s years away from clinical trials, this compound is an exciting possibility which appears to have some effects across more than one neurodegenerative disease.  And at Prion2013 we learned that Prusiner’s lab at UCSF had a new compound that looked extremely promising, but ultimately proved not to work against human CJD. That’s disappointing, but at least they were smart enough to test their drug on CJD in the lab – it’s better to know this result now than needing to wait for an unsuccessful clinical trial.  They have dozens of other compounds in their pipeline and are committed to the most rigorous possible testing of their drugs before they move for anything to be tested in humans.