In the last two posts we introduced the concept of a prion and introduced the human prion diseases, better known as Creutzfeldt-Jakob disease (CJD), fatal familial insomnia (FFI), and Gertsmann-Straussler-Scheinker syndrome (GSS).  Altogether these diseases are pretty rare, with an incidence of about 1 in 1 million people falling ill each year [Holman 2010]. The genetic forms of prion disease are even more rare, accounting for probably just 15% of all cases [Appleby & Lyketsos 2011]. 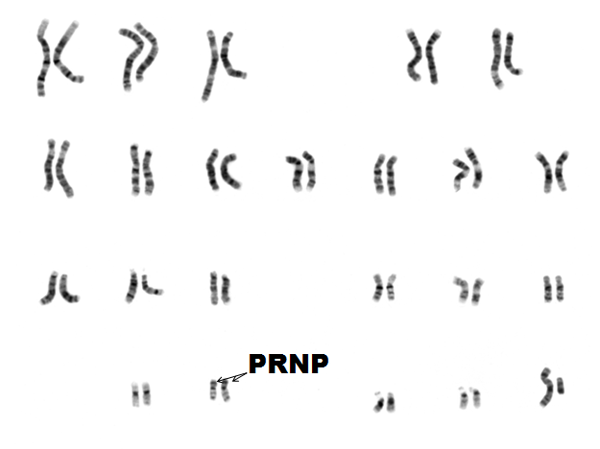 DNA contains instructions that have to be converted into RNA, and then the message in the RNA is translated into protein. So the gene PRNP in your DNA spells out instructions for making, ultimately, the prion protein (PrP). Everyone has PrP on the surface of their cells, and most of the time this is a perfectly good and healthy thing.

Genetic mutations – think of these as typos in DNA – change the instructions and end up producing a slightly different protein. Most of the time that’s fine, but some mutations are really bad.

There are two main ways that mutations can be bad. First, they can make a protein that doesn’t do its job correctly. This is called a loss-of-function mutation. The other option is that they can make a protein that does do something new that it shouldn’t be doing.  This is called a gain-of-function mutation.  Genetic prion diseases are caused by a gain-of-function mutation in PRNP.  They produce a slightly altered version of prion protein (PrP).  A person can be pretty much healthy and fine with this version of PrP for decades, but as people get older, this protein is likely to eventually misfold and form a prion which can then attack other PrP and spread across the brain.

There are over 40 different mutations that can cause genetic prion disease [Beck 2010], and each mutation tends to have its own particular symptoms, disease course, age of onset, and so on [Kong 2003, Mastrianni 2010 (full text)]. In other words, the mutation defines the disease.

Therefore it’s important to have a system for naming mutations. The system that we use involves a lot of seemingly random numbers and letters such as “E200K.” Let’s break down what this code means.

Sometimes there are even more numbers and letters. For instance, fatal familial insomnia is caused by a mutation called D178N 129M.  Here, D178N means asparagine (N) instead of aspartate (D) at amino acid #178, and 129M means … and then methionine (M) at amino acid #129. Fatal familial insomnia is unusual in that the D178N mutation causes the disease, but the exact type of disease is determined by which amino acid is found at position #129 [Goldfarb 1992].

Still other cases of genetic prion disease are not caused by a change in just one amino acid. One part of PrP has a repeating stretch of the same 8 amino acids over and over again, and this is called the “octapeptide repeat”. Some genetic prion diseases are caused by having too many copies of this repeat, and these are named by the number of extra copies – for instance, “6-OPRI” means 6 extra copies of the octapeptide repeat inserted.

Genetic counselors give people with genetic mutations advice on what their mutation means. Often this might include some statement about the typical age of disease onset for a person’s mutation. Estimates like these can be useful, but it is worth taking them with a bit of caution. For most genetic prion disease mutations, the age of onset can vary by a few decades. The statistics are usually based on a review of patients’ cases that doctors have reported in medical journals [Kong 2003] and there are many possible biases here. Younger patients might be more likely to be reported, people who die of something else first are almost never reported, and the statistics often fail to take into account the people still alive with the mutation. Moreover, the predicted age of disease onset for any one person really depends on how old they are today – after all, a person who is 60 today can’t have an age of onset of 50, even if that is the average for their mutation. For all of these reasons, statistics like “average age of onset” should never be taken as a hard-and-fast prediction about one’s own life.

Even more importantly, there are good reasons for optimism that things will change, and that the diseases that we consider fatal and untreatable today will eventually be things of the past. We at Prion Alliance are working hard for a future where prion diseases don’t kill people. And we’re not alone – there are lots of bright scientists working in the prion field, and potential treatments at a variety of stages in the research pipeline. We can’t say exactly when treatments will become available, but lots of excellent science is being done every day, and we think right now is a good time in history to be an optimist.